The artificial lake above is supplied by the wall of Atlas Mountains in the background and has been watering the surrounding groves of palm, olive and fruit trees, known as the Menara Gardens, since the 12 century. The elegant 19th-century pavilion is used for picnicking and gazing out over the lake and gardens. A shady, tranquil sanctuary from the summertime swelter and crush of the Red City, the gardens attract tourists and locals alike.

END_OF_DOCUMENT_TOKEN_TO_BE_REPLACED 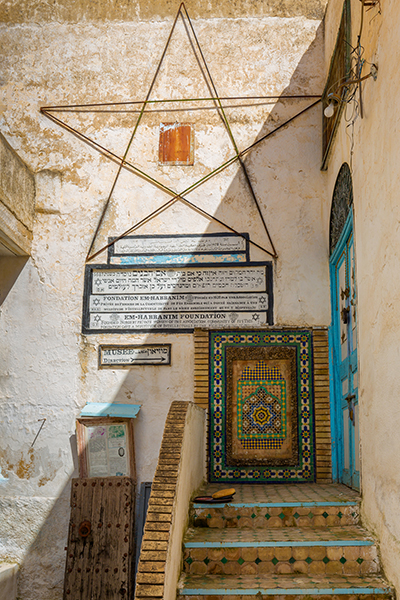 END_OF_DOCUMENT_TOKEN_TO_BE_REPLACED

The blue men of the Sahara get their name from the blue robes and scarves that they traditionally wear. They are Tuareg, an ethnic group of the native Amazigh or Berber. About 2 million Tuareg live in the Sahara region today. The largest populations are in Niger and Mali, with a relatively small number in our mystery country.

The Tuareg are traditionally semi-nomadic traders, moving goods across the Sahara Desert to Mediterranean and Atlantic ports. They also carried enslaved people from West Africa to coastal markets and kept slaves themselves well into the 20th century. Slavery is still practiced in some communities.

Tuareg society is matrilineal and women generally have more autonomy and power relative to other Arab communities. Traditionally, Tuareg men veil their faces and women do not.

END_OF_DOCUMENT_TOKEN_TO_BE_REPLACED

The Draa River in the south of our mystery country is the country’s longest river, originating in the High Atlas Mountains and emptying into the Atlantic Ocean, although much of the year the river runs dry along 2/3rds or more of its length. The scenic river valley is punctuated with dense palm groves and historically was a major trading route for merchant caravans traveling from sub-Saharan Africa to the markets of Marrakech and Fez. To control this important passage, fortified towns or kasbahs were established along the route, some of which are still populated today.

END_OF_DOCUMENT_TOKEN_TO_BE_REPLACED

Click to see tours that include visits to Ait Ben Haddou.

About a 30-minute drive from Ouarzazate, Morocco, or a long day-trip from Marrakech, Ait Ben Haddou is a fortified village (ksar) in south-central Morocco. It’s only one of many ksars built by the indigenous Amazighen (Berbers) in the area, but, thanks to its status as a UNESCO World Heritage Site and a setting for a long list of Hollywood films, this ksar, unlike its fellows, is well preserved. It sits in the southern foothills of the High Atlas Mountains on the old trade route between the Sahara desert and Marrakech. END_OF_DOCUMENT_TOKEN_TO_BE_REPLACED

Happy Friday! Behold some of our favorite images from past Foto Fridays ~

camelboy in the desert of northern Oman, photo by Sallie Volotzky