In some Christian denominations, including the Greek Orthodox, January 1st is the Feast of the Circumcision of Jesus. According to Jewish tradition, male babies are circumcised 8 days after birth. The day is honored as Jesus’ first sacrifice for human kind.

January 1st is also celebrated as the anniversary of the death of St. Vasilios (Basil), an early church father remembered for his generosity, especially to the poor. Holiday gifts are traditionally exchanged on New Year’s Eve or New Year’s Day, rather than the 24th or 25th of December and it’s St. Vasilios who brings gifts for children instead of St. Nicolas.

St. Nick does get a nod though. His feast day on December 6 opens the Christmas season, which ends with the Feast of Epiphany on January 6. The 12 days of Christmas begin with the birth of Jesus on December 25 and end with the visit of the Magi on January 6th. So, while many Americans close the holiday season on January 2nd, Greece remains in the thick of it for a few more days.

On New Year’s Eve, it’s traditional for family and friends to gather for a big meal and stay up waiting for the New Year and St. Vasilios to arrive. They might pass the time playing games of chance, this being a particularly lucky day.

An onion is hung on the door overnight as a symbol of renewal. Once the New Year rings in, a pomegranate, symbol of prosperity, is smashed on the doorstep before entering the house the 1st time.

The Vasilopita is a traditional cake baked with a coin inside. On New Year’s Day, the cake is served and whoever finds the coin in their cake can look forward to a lucky year.

Cheers to all and best wishes for a healthy, prosperous and peaceful 2019!

Coffee came to Turkey in the 16th century, discovered in Yemen by an Ottoman official and introduced to the sultan Suleiman the Magnificent. Its popularity quickly spread but in the following century, it was deemed a drug and outlawed, upon pain of death, likely because the coffee house culture encouraged political discourse and potential dissent. Despite the harshest of penalties, the prohibition could not hold against the demand.

The name Turkish coffee refers to a method of preparation, the oldest there is, rather than a particular set of ingredients. The same or very similar drink is popular across the Middle East and eastern Europe, sometimes called Turkish coffee but often named for the country in which it is served.

So, here goes. It’s very simple. You need a special pot called an ibrik or cezve, usually copper with a wooden handle (I bought mine for well under $10), and a teaspoon. 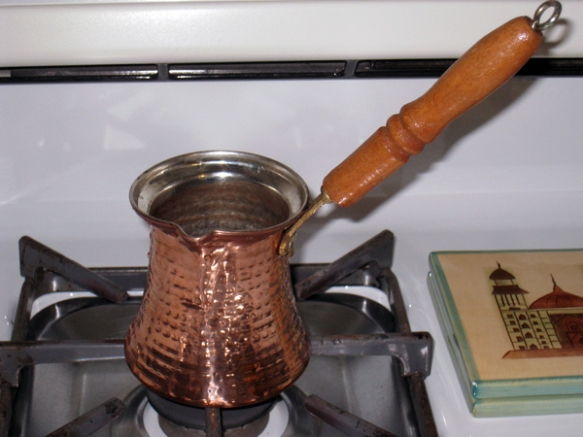 You can use any coffee but fresh ground beans are the best. The grind must be extremely fine, like powder. Few standard electric coffee grinders will do the job. A hand-crank pepper mill works great. 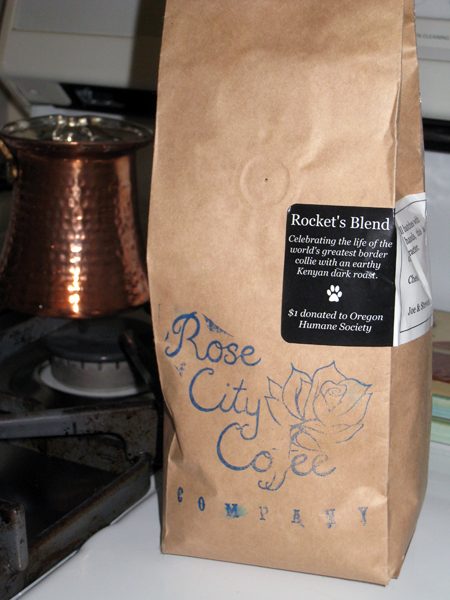 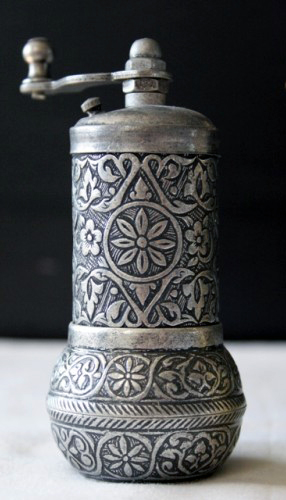 Measure cold water into the cezve with a demitasse cup and add 1-2 heaping teaspoons of coffee per cup of water. If you like it sweet, add sugar now. Stir until the coffee is mixed well into the water and the sugar is dissolved. Heat on medium until the coffee bubbles up to the rim of the pot, then remove from heat. (You have to watch this coffee while it brews, once it starts bubbling, things move fast. Look away for a second and you might have a very messy stove.) 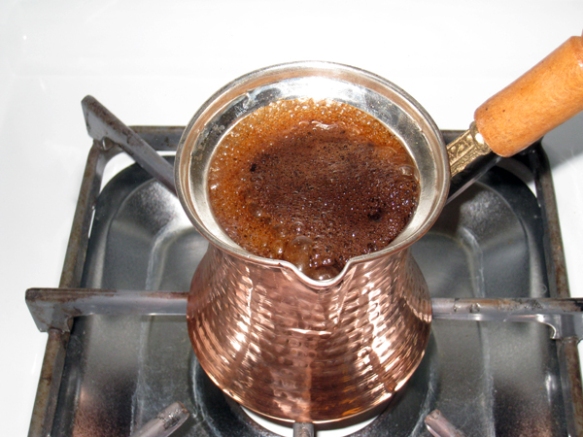 Once the coffee returns to a nonfoamy state, put it back on the heat and repeat. Let it foam up on the heat to near overflowing three times. Then serve. Don’t stir. 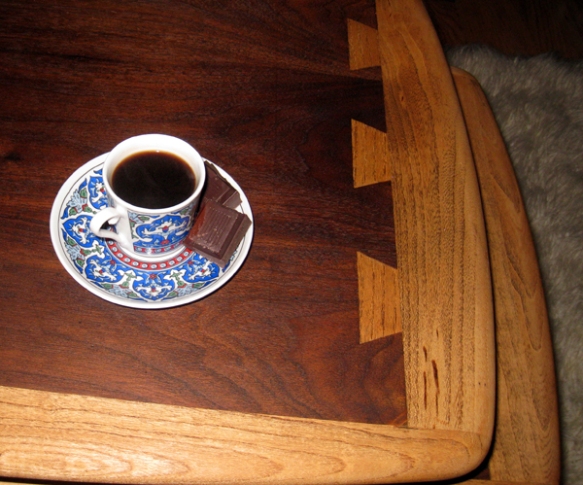 If you’d like to have Turkish coffee in Turkey or Morocco or Greece or Oman…we can help you with that. Visit our web site at www.yallatours.com.

One of Turkey’s favorite street foods is kumpir, what we in the U.S. would call a loaded baked potato, dressed up a la carte, with a kaleidoscope of toppings selected according to the taste, adventuresome nature, aesthetic and upper arm strength of the imminent consumer. The combinations are endless. Some common toppings are corn, peas, hot peppers, sweet peppers, chopped greens, pickled vegetables, kisir (bulgar salad, aka Turkish tabbouleh), chopped hotdogs, mushrooms, olives, chick peas, carrots, yogurt, mayonnaise, ketchup… really, anything goes. At a typical kumpir stand, baked potatoes are split in the middle and the steaming, fluffy innards are roughly mashed with a dollop each of butter and Kaşar cheese. Then they’re yours to top with the flavors, colors and textures of your choosing. Kumpir stands are found all over Istanbul, and around the country, but the Bosphorus-front Ortaköy neighborhood in Istanbul is practically synonymous with kumpir.

Kumpir with a view in Ortakoy

If it is your first encounter with Turkish culture, the richness of the Turkish breakfast table may leave you in awe. Lost for words, even. Though there are variations from region to region, generally a Turkish breakfast table consists of bread, butter, cheese, tomatoes, cucumbers, olives, honey, jam, eggs, pastrami, and tea – but Turkish specialities such as kaymak, menemen, börek, and simit are the additions you will not find anywhere else. Here is a handy dictionary of the most important breakfast foods, so that you can navigate your way around the breakfast tables of Turkey with ease.

END_OF_DOCUMENT_TOKEN_TO_BE_REPLACED

Here’s my attempt at Ottolenghi’s Shakshuka recipe. It’s not as pretty as his but tasted divine.

Shakshuka is a North African dish eaten all over the Middle East and is a special favorite in Israel. It’s commonly eaten for breakfast but is delicious anytime, anywhere. One of many variations is to sprinkle with feta cheese, which I plan to try next time.

This recipe is from Yotam Ottolenghi’s fabulous vegetarian cookbook Plenty.
Check out all of his cookbooks (not all vegetarian) here. Ottolenghi grew up in Israel and is credited by many with starting the recent Middle Eastern/Mediterranean-food renaissance (in the U.K. and U.S. at least), heavy on vegetables, legumes and grains. He runs the restaurants Ottolenghi and Nopi in London.

Add the tomatoes, saffron, cayenne and salt and pepper. Reduce the heat to low and cook for 15 minutes. During the cooking keep adding water so that the mix has a pasta sauce consistency. Taste and adjust the seasoning. It should be potent and flavorful. (You can prepare this mix well in advance.)

Remove the bay leaves, then divide the pepper mix among four deep frying pans, each large enough to take a generous individual portion. Place them on medium heat to warm up, then make two gaps in the pepper mix in each pan and carefully break an egg into each gap. Sprinkle with salt and cover the pans with lids. Cook on a very (!) gentle heat for 10 to 12 minutes, or until the eggs are just set. Sprinkle with cilantro and serve.

As you walk down almost any street in Istanbul, save for the main arteries, there’s a distinct perfume of late summer afternoons. The figs have arrived and so has their sweet, heady aroma. Though dried figs are available all year round in Istanbul, there’s nothing like biting into a fresh one, as its perfume hits the back of the throat, and the crunchy seeds heighten the pleasure derived from its sweet chewiness.

END_OF_DOCUMENT_TOKEN_TO_BE_REPLACED

There is a Turkish saying, “Zemheride yoğurt isteyen, cebinde inek taşır” – “The one who wants yogurt in midwinter carries a cow in his pocket.” We’re lucky to be in the heart of summer, as our pockets aren’t big enough for cows. In fact, Istanbul natives know that yogurt is the ideal antidote to the city’s sweltering heat. With its powerful health properties and addictive taste, yogurt is a fermented friend to rely on: slurp down some cooling yogurt soup, dollop it on the side of bulgur pilav, drizzle it with garlic over crispy mantı, or sip it in the form of salty ayran.
END_OF_DOCUMENT_TOKEN_TO_BE_REPLACED

The excellent Istanbul restaurant Meze by Lemon Tree is owned by good friends of Ya’lla Tours. (A meze is an appetizer.) When you’re in Istanbul, do check it out.
The restaurant has received rave reviews in dozens of publications and the Trip Advisor Certificate of Excellence 2012, 2013 and 2014.

Chef Gençay Üçok has been kind enough to share several of his recipes with me for publication on this blog. END_OF_DOCUMENT_TOKEN_TO_BE_REPLACED

vineyards in the Upper Galilee

Jews, in general, have never been big drinkers, but they have been making wine for use in ritual for thousands of years. Most of that wine was pretty awful, maybe purposely so, to discourage recreational imbibing. If you’ve ever tasted Manischewitz wine, you know what I mean. END_OF_DOCUMENT_TOKEN_TO_BE_REPLACED

Across the Muslim world, stories and anecdotes attributed to or about Nasreddin Hodja are as much a part of the collective consciousness as the Grimm’s Fairy Tales in Europe and North America.

Nasreddin was probably a real man who lived in Turkey in the 13th century. Some sources say he was born in Turkey, others that he moved there from Iran. In any case, it seems agreed that he lived and worked as a judge and teacher in Aksehir, near the city of Konya in central Turkey. He is known for his sly wit, appreciation of the absurd, optimism and genial nature. The honorific Hodja refers to a wise teacher. END_OF_DOCUMENT_TOKEN_TO_BE_REPLACED