Bahla Fort is just one of many historical forts in our mystery country. It is, however, one of the oldest and the only one listed as a UNESCO Historical Site. The site is an oasis in the foothills of the Jabal al-Akhdar (the Green Mountain, part of the Al Hajar Mountains) in the interior of the country, about a 1/2-hour drive from the city of Nizwa. Bahla was built by The Nabhani dynasty, which ruled the area and controlled the lucrative trade of Frankincense from the 12th to 15th centuries. Construction of the sprawling complex, which is enclosed by a wall over 12km in length, was on-going throughout Nabhani rule and beyond.

END_OF_DOCUMENT_TOKEN_TO_BE_REPLACED 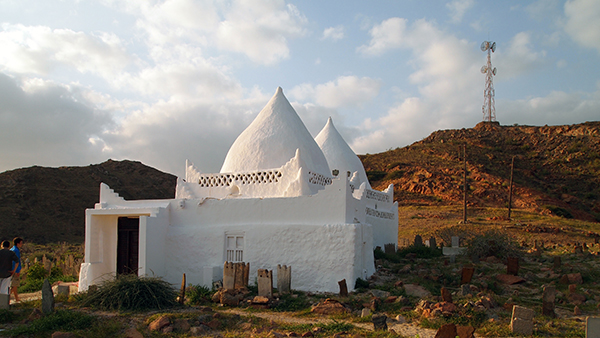 the Bin Ali tomb and mosque near Mirbat in the Dhofar governorate, southern Oman 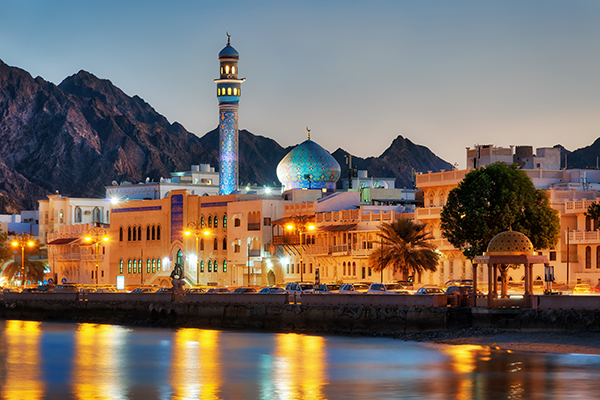 the Muttrah Corniche in Muscat 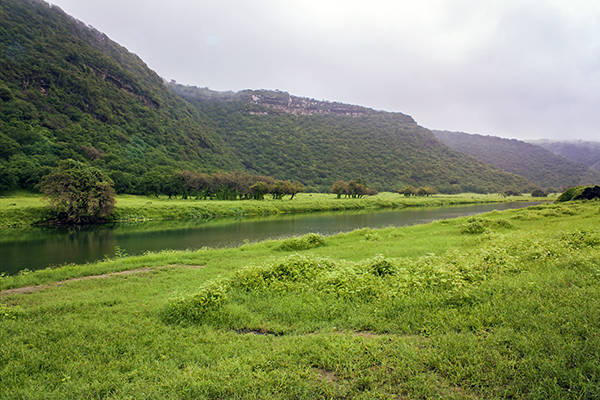 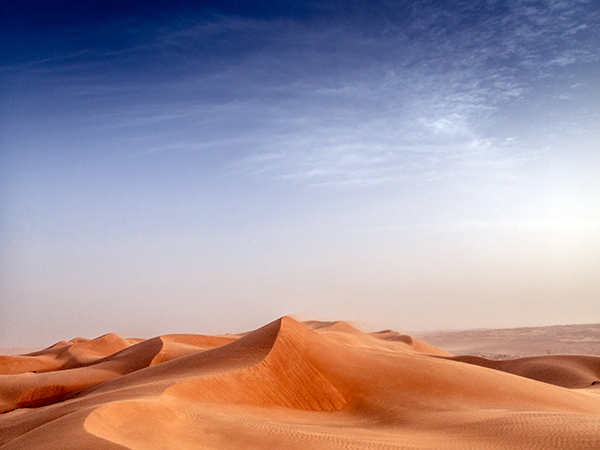 the Wahiba Sands (aka Sharqiya Sands)

In the Rub’ al Kahli desert (the Empty Quarter, the largest contiguous sand desert in the world) at the tiny village of Shisr, Oman, ancient remains discovered in 1992 may be the legendary city of Ubar.

Ubar (aka Wabar, Imran or Iram of the Pillars) is called out in the Quran as a wicked, many-towered city that God caused to be swallowed up in a massive sand storm. In the tales of 1001 Arabian Nights and Bedouin folk tales Ubar is described as a gilded, bejeweled city with soaring towers.

The buried remains at Shisr were discovered in 1992 based on satellite imagery, ancient maps and a process of deduction. At the time, archaeologists concluded that the ancient city had disappeared into a sinkhole. Excavations have revealed a fort on the site with eight 10-12 foot tall walls, joined by multiple watch towers that were about 30 feet tall.

Whether or not the site is the legendary city, evidence is clear that it was a trading post, and caravanserai for desert caravans traveling the incense route between Arabia and the Mediterranean Sea. Artefacts from far-away lands have been found and satellite imagery shows tracks crossing the desert and converging on the site.

T.E. Lawrence (of Arabia) dubbed Ubar “Atlantis of the Sands” and talked of taking up the search himself, but he never did. British explorer Sir Ranulph Fiennes was part of the team that discovered the ruins at Shisr after searching for decades. Read more in his book Atlantis of the Sands – The Search for the Lost City of Ubar.

Shisr is located in the Dhofar province of Oman, about 3 hours from the provincial capital Salalah.

Sharqiya Sands, also known as Wahiba Sands after the local Bani Wahiba tribe, is roughly 4,000 square miles of sandy dunes in the north-east of our mystery country, about a two-hour drive from the national capital of Muscat. Along with several indigenous Bedouin groups inhabiting this desert, the high moisture content of the sand supports a surprising variety of flora and fauna. Heavy fog regularly rolls in off the sea and is absorbed by the sands.

There are lodges and tent camps in the Sharqiya Sands, but tourism, which has taken off across the country in recent years, may soon be limited to designated areas in order to preserve the unique and sensitive ecosystem.

END_OF_DOCUMENT_TOKEN_TO_BE_REPLACED

Al-Ayn, in the northwest of our mystery country, is one of several places to see the Bronze Age beehive tombs. Although they are frequently referred to as tombs, no human remains have been found, leaving the purpose of these monuments in question. Over 100 of these structures are scattered around 3 different sites within about a 30 minute drive, as well as the remains of houses and other evidence of human settlement. At al-Ayn, Jebel Misht makes a dramatic backdrop to 21 tombs.

END_OF_DOCUMENT_TOKEN_TO_BE_REPLACED

Happy Friday! Behold some of our favorite images from past Foto Fridays ~

camelboy in the desert of northern Oman, photo by Sallie Volotzky

Wadi Darbat near Salalah in the southern govenorate of Dhofar shows off its Khareef green. The Khareef, or monsoon, rolls into Dhofar in late July and hangs around until September. While monsoon season may not sound inviting, the Khareef brings light drizzle, mist and fog, not torrential rains, and the normally brown, thirsty landscape springs to life. While the rest of this desert country bakes in summer heat, Dhofar is a paradise of gentle temperatures and lush scenery.