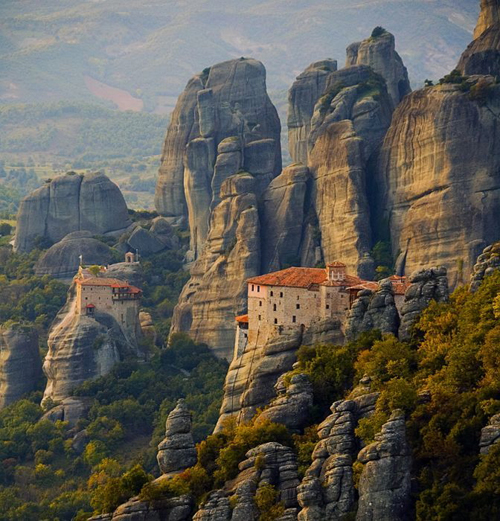 In central Greece,  near the town of Kalambaka, is Meteora. The name means something like “suspended in air” and describes a collection of Greek Orthodox monasteries perched 1,000 feet above Plain of Thessaly at the top of titanic natural pillars.

The pillars were first inhabited by Christian hermits in the 11th century, seeking solitude and security. They scaled the towers and lived in caves and cracks in the stone. In the 13th century, groups of monks came to the area and began to build. Over the next several hundred years over 20 monasteries were built. 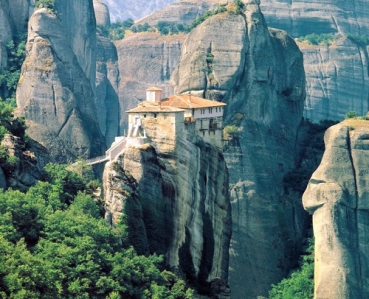 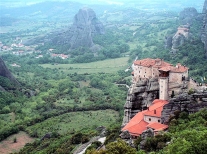 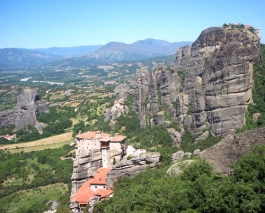 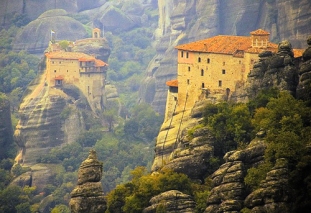 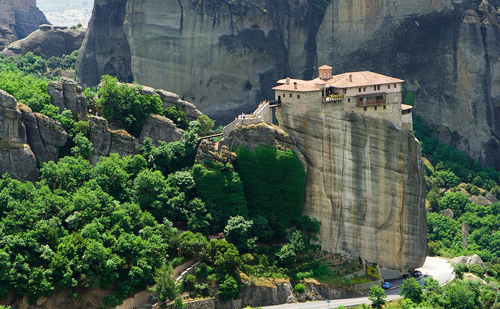 Today, the six surviving monasteries are open to visitors. Inside you’ll find a few monks and nuns and important collections of frescos, manuscripts and icons. It’s over 5 hours from Athens, so you’ll want to overnight in Kalambaka, the small town at the foot of the rock towers. You can get a 2-day motor coach tour to Meteora from Athens or a 3-day tour to Meteora and Delphi, or a 4-day tour that combines Meteora with Mycenae, Epidaurus, Olympia and Delphi.

Visit www.yallatours.com/greece to see tours that include Meteora.

In the central north of or mystery country, a collection of  monasteries perch 1,000 feet above the Plain of Thessaly at the top of titanic natural pillars. This is Meteora, first inhabited by Christian hermits seeking solitude and security in the 11th century.
These first settlers scaled the towers and lived in caves and cracks in the stone.
In the 13th century, groups of monks came to the area and began to build. Over the next several hundred years over 20 monasteries were built. Today, six of the surviving monasteries are open to visitors.

END_OF_DOCUMENT_TOKEN_TO_BE_REPLACED

Located in the central part of our mystery country, Lake Plastiras is an artificial lake formed by the damning of the Tavropos River in 1960. The lake, also known as Tavropos Reservoir, attracts visitors looking for a break from congested cities and crowded tourist sites. Charming villages surround the lake, each with its own particular vantage on beautiful, serene nature. Outdoor recreating is a big draw, with canoeing, kayaking, hiking, mountain-biking and horseback riding just a few of the activities available at the lake. The spectacular monasteries of Meteora make an easy day-trip from Plastiras and the capital city is about a 4-hour drive to the south.

END_OF_DOCUMENT_TOKEN_TO_BE_REPLACED

Too obvious? Maybe so, but there’s no denying the wow-factor of the pyramids at Giza. The largest, known as the Great Pyramid, was built for the pharaoh Khufu (Cheops in Greek). It stands almost 500 feet tall and is constructed of 2.3 million limestone and granite blocks, some of which weigh 80 tons. Some of the materials were locally sourced but the granite, 8,000 tons of it, came from the quarries at Aswan, 500 miles up river. The Giza pyramids were all built about 4,500 years ago, which makes their immense size all the more incredible. We know they were built as tombs and archaeologists have come up with some very plausible explanations for how they were built; still, few places on earth inspire such wonder.

The Treasury as seen from the siq, Petra, Jordan

The whole of the ancient city of Petra is astonishing, but, for a couple of reasons, the Treasury is the unequivocal star. In a city full of tombs, dwellings and temples, most of which are carved right into the canyon walls, the Treasury is the best-preserved and grandest of all. Then there’s its alluring position. Surely it’s no accident that the city’s best building is the first thing you see upon entering, if you come though the siq (canyon), which most visitors do. After walking for about a mile, you come around a bend and there it is, magnificently filling the seam of light that opens onto the city. It says “Be impressed.” And you are. The likelihood that you have been anticipating the sight with every step does not diminish the effect. CLICK to read more about Petra.

At Meteora in central Greece, six Orthodox monasteries cling to the tops of soaring sandstone pillars and look out over the stunning Peneas Valley. The monasteries were built in the 14th-16th centuries by hauling materials in nets 1,000 feet straight up the sheer pillar walls. CLICK to read more about Meteora.

The Greece travel season of 2014 is fast upon us. Here, we offer some enticing images to mark the occasion.