One of the reasons we travel is to have first-hand experiences of places we have known only in our imaginations. This can apply to any destination but is especially true of places associated with narratives that have been woven into our cultural identities for centuries. If you have visited places with strong historical and/or cultural significance, you know what I mean. There’s an essence of place, made up of layers of history and legend that hang around and bring an intangible or an extra-tangible substance to the physical remains.

Here are 2 stories that contribute to the multifaceted experience of Ephesus.

The Seven Sleepers
Around 250 BCE in Ephesus, despite persecution under the Roman emperor Decius, seven young Christian men stayed true to their faith. They retreated together to a nearby cave to strengthen their resolve through prayer and, after some time, they all fell asleep. Meanwhile, the local Roman officials, under pressure from their hardline leader to cleanse the city of Christians, seeing no possibility of reasoning with the committed youths, sealed them up in the cave.

Nearly two hundred years had passed when the cave was opened by the land owner. Thinking they had just had a regular nap, the young men went out into the city and found it very changed. While they slept, Christianity had become the official religion of the empire and there were signs of it everywhere. These clearly bewildered, oddly foreign men attempting to spend obsolete coins attracted attention and the Bishop was called to assess the situation. It didn’t take long for the Bishop and the seven to realize that a miracle had occurred and, once they knew it, the young men died.

This was a popular story in the early Christian Churches and on through the Middle Ages. The story is also told in the Koran. 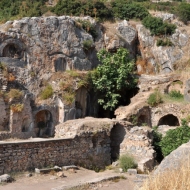 The Riot at Ephesus
The Christian evangelist Paul, lived in Ephesus for 2-3 years around 50CE. He preached to Jews and pagans, helped strengthen the church there, wrote letters to other churches and traveled the surrounding countryside spreading the gospel. While Ephesus was a very cosmopolitan, culturally diverse and tolerant city, it was overwhelmingly devoted to Artemis of Ephesus, both spiritually and economically.
The Greek goddess Artemis was merged with the Anatolian great mother goddess Cybele to become the major deity of the whole region, but especially at Ephesus. The Artemis Temple at Ephesus was one of the Seven Wonders of the World and attracted a steady stream of pilgrims.

After nearly 3 years in Ephesus, Paul showed no signs of slowing in his efforts to build the Church there. The artisans and vendors of Artemis statues, who, most likely, had been monitoring Paul from the beginning, were suddenly whipped into a defensive frenzy by one silversmith named Demetrius. They took their outrage through the streets shouting GREAT IS ARTEMIS OF THE EPHESIANS! It seemed the whole city was swept up in the protest. They filled the theater and continued to chant GREAT IS ARTEMIS OF THE EPHESIANS! Paul tried to enter the theater to address the mob but his friends held him back, fearing for his life. Order was finally restored by a city official who recommended that grievances be handled through the proper authority. Paul and his friends were unharmed but Paul left Ephesus not long after. 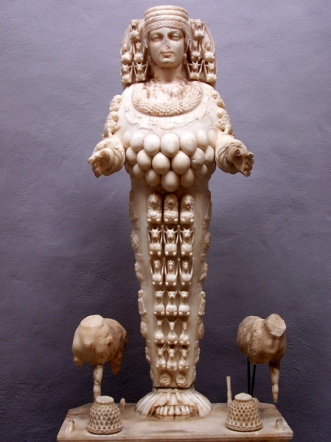 Artemis of Ephesus, draped in wild animals and a zodiac garland. There are varying opinions about what is represented by the three rows in the upper midsection. Some possibilities are: breasts, bull testicles, bunches of grapes… 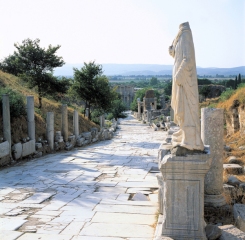 Curetes Way, one of the main streets in Ephesus. The Library of Celsus, at the bottom of the road, was built about 60 years after Paul was there.

The Ephesus theater, where the angry mob chanted GREAT IS ARTEMIS OF THE EPHESIANS!