Start at the Sheikh Mohammed Center for Cultural Understanding (SMCCU), where you can have a traditional breakfast and learn about the culture of Dubai and the UAE in general. Tradition remains a strong current throughout UAE society, while it adapts to tolerate, if not embrace, some of the modern social mores of the 80-90% ex-pat population.

The SMCCU is located in an old wind-tower house in the Al Fahidi district (also known as Bastakiya) of Bur Dubai on the western side of Khor Dubai (Dubai Creek). The district is named for Al Fahidi Fort, the oldest standing building in Dubai. The residential area that grew up around the fort was planned to make life in the extreme climate as comfortable as possible. Houses were built around narrow, winding lanes to maximize shade and draw cooling breezes through. Towers on the houses drew air down past water, which cooled the rooms as it evaporated on the wind. 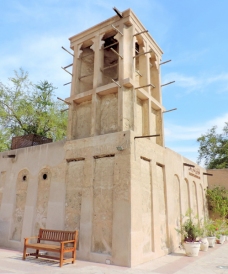 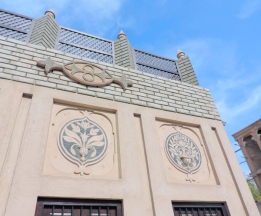 Take an abras (water taxi) across the creek to Deira, where you’ll find the souks. If you’ve been to souks in Fez, Istanbul, Jerusalem and Cairo, Dubai’s souks probably won’t blow your socks off, but they do have local charm and are well worth some poking around. The Gold Souk is really something to behold and many visitors to Dubai come just for the gold. 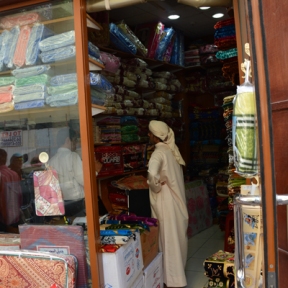 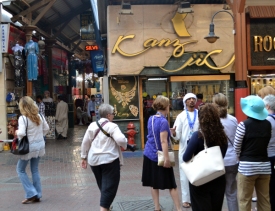 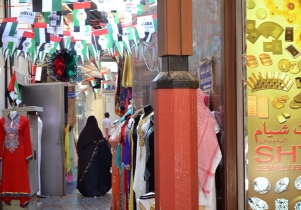 Then travel in a matter of minutes from old Dubai to the number-one icon of new Dubai, Burj Khalifa, the world’s tallest building. I like buildings and have raved about this one more than once in this blog: here and here. Take the At The Top tour for access to the observation deck on the 124th floor. Burj Khalifa is part of the Downtown Dubai development, which includes the Dubai Mall (for a completely different shopping experience from the souks) and the musical Dubai Fountain. 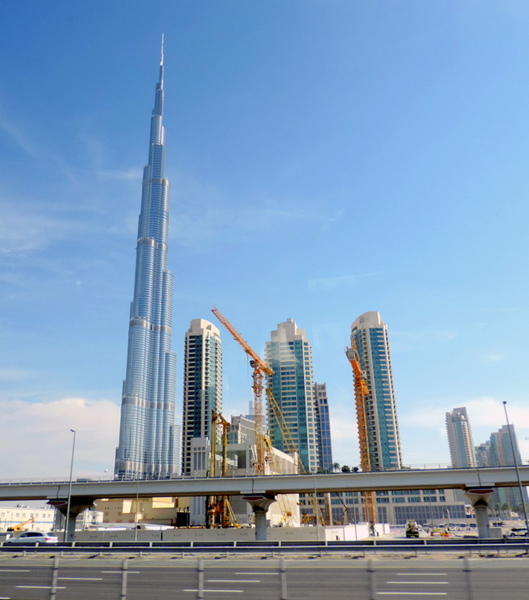 Start the day with breakfast at the Farriers Restaurant with views of horses during morning track work on the Meydan Racecourse. After breakfast, take a tour of the Meydan Stables.

Drive to the giant Jebel Ali port, about 20 miles south of Dubai city, for a seaplane tour. The aerial perspective really helps to take in the extraordinary evolution of Dubai. You’ll fly over the whole city, but birds-eye views of the man-made Palm Jumeirah and World Islands, the Burj Khalifa and the sail-shaped Burj Al Arab Hotel are especially astonishing.

Come down to earth with a tour through the art spaces on Alserkal Avenue in the industrial Al Quoz district. Since 2007, Alserkal Avenue has developed “organically,” as they like to say, into a hopping arts scene, with the city’s largest concentration of galleries and arts venues. It’s a good place to ground and balance out the hyper-commercialism that built Dubai and keeps it ticking. 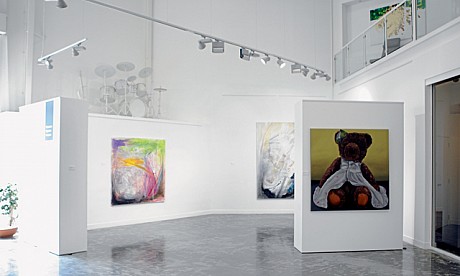 Happy Friday! Please enjoy a few images of some of the world’s great buildings:

The Burj Khalifa in Dubai is the world’s tallest building. Click to read more about this building. END_OF_DOCUMENT_TOKEN_TO_BE_REPLACED

The answer to the last episode (episode 8) is: DUBAI.
Clue 1a – Burj Khalifa
Clue 1b – Burj Al Arab
Clue 2 – wind-tower house in the Bastakiya district of Dubai
Clue 3 – a shop in the gold souk in the Deira district of Dubai

Now for this episode –

We’ll show you images of popular tourist sites in our mystery country, along with descriptions of those sites. END_OF_DOCUMENT_TOKEN_TO_BE_REPLACED

Largest Shopping Mall – Dubai Mall
Dubai is famous for its shopping. With over 70 malls and shopping centers, and more in the works, shopping is the city’s top tourist attraction. Now, the pinnacle of shopping malls in the world’s best shopping city has got to be something to see. If shopping is your thing, I’m sure you would agree. That place is Dubai Mall, the largest mall in the world, with 1200 shops, including chain stores from around the world, as well as local names, hundreds of places to eat, an ice rink, a theme park, an aquarium (see below), a 22-screen cinema and access to Burj Khalifa, with all of its wonders (see above).

Largest Aquarium Viewing Panel – Dubai Aquarium
Inside the world’s largest shopping mall (see above) is the world’s second largest aquarium with the world’s largest viewing window – 108 feet long and 27 feet tall. Through the giant window you can watch a mesmerizing ballet of 33,000 marine animals, probably not all at the same time.

Largest Dancing Fountain – Dubai Fountain
Outside the world’s largest shopping mall (see above) is the world’s largest dancing fountain, performing every 30 minutes from 6-11pm (11:30 Thurs-Sat). The fountain winds for 900 feet around Dubai Lake and shoots water 500 feet into the air.

Largest Man-Made Marina – Dubai Marina
Motivated by the demand for waterfront property, Dubai has developed the largest man-made marina in the world. A two-mile long channel was dredged to let in water from the Arabian Gulf and a city within a city rose up along its shores.

Most Luxurious Hotel – Burj Al Arab
The iconic, sail-shaped Burj Al Arab has been called the only 7-star hotel in the world. Built on an artificial island just off Jumeirah Beach, the only access is by a private bridge (or helipad). Although it’s the world’s 4th tallest hotel, it has only 202 guest suites on 28 double floors. Suites range in size from 1,820 to 8,400 square feet.

That’s all the superlatives I have for now, although I’m pretty sure most of the projects mentioned above broke records for speed of construction and money spent. Dubai is nothing if not determined to succeed in tourism. In 2013 it was ranked the 7th most visited city in the world. We’re betting it will do better than that in years to come.

Click to see tours to Dubai on our web site.

The Burj Khalifa is the tallest building in the world. The project broke ground in January 2004 and building was completed in January 2010. The three-lobed, spiral design was inspired by a desert flower, the Hymenocallis, as well as the onion domes and spiral minarets of traditional Islamic architecture. The three-wing, Y-shape allows more surface area for windows, which maximizes light and views. As the building ascends it streamlines with 27 set-backs, very common in super-tall structures and an engineering devise known to the earliest architects. The Chicago firm of Skidmore, Owings & Merrill (designers of the 1 World Trade Center in New York), with chief architect Adrian Smith, won an international competition to design the Burj Khalifa.

the Step Pyramid at Sakkara, Egypt – an early use of set-backs in tall building engineering

spiral minaret of the Qatar Mosque in Doha

onion domes of the Grand Mosque in Abu Dhabi, UAE

Going up! At The Top elevator, Burj Khalifa, Dubai, UAE

A 27-acre, Hymenocallis-influenced park swirls around the base of Burj Khalifa and is watered, at least in part, by the 15 million gallons of condensation collected from the building’s cooling system each year and stored in tanks in the parking garage.

Burj Khalifa anchors the Downtown Dubai development, which also includes the world’s largest dancing fountain on a 30-acre, man-made lake, the Dubai Mall, and The Address Hotel. The Dubai Mall has 1200 shops, over 1,000 places to eat, cinemas, an ice rink, a theme park and a very cool aquarium and underwater zoo, among lots of other stuff to look at and/or spend money on.

See our tours to Dubai here.